Laravel is a one of the most popular open-source PHP frameworks. It is easy for developers to access and write code that is readable, maintainable and efficient. It is also a flexible and robust solution for website features.

This article will give you a concise understanding of Laravel PHP and why it is a favourite amongst chilliapple developers. It will highlight the pros and cons of the framework as well as its future for web development.

Be prepared for a little technical jargon in this article. It is sometimes difficult to remove certain language without missing some important aspects of the framework. chillapple Laravel experts are on hand whenever you need further explanation.

What is Laravel and What is it Used For?

First of all, let’s explain what PHP means. PHP was originally known as Personal Home Page and is an extremely popular scripting language that is used to create dynamic web pages.

Laravel is an open-source PHP framework that beta-launched in 2011. Developers love it because it supports advanced and scalable web applications for clients big and small and of any industry or stage of growth and Laravel aficionados include the likes of the BBC and Pfizer.

Created by Taylor Otwell, its focus is to make code simple, efficient and powerful. Laravel grows with its users and streamlines the software development process so that developers can create the best solution for their projects.

Currently there are just over 645,000 active websites supported by Laravel development and its a favourite for developers as it automates repetitive coding tasks to reduce the time required to build websites as code doesn’t need to be written from scratch. It also has extensions, tools and Laravel community libraries to support engineers with the development project and ensure they follow best practice and industry standards to write the best code they can that is well documented and simpler to update.

The fact that the framework is written in the PHP language is advantageous as many developers are already familiar with PHP and can therefore get started with development very quickly. It also means that they can move existing codebases and systems into the framework easily.

Is Laravel Frontend or Backend?

Whether Laravel is for frontend or backend builds is often a question that is asked and there isn’t a simple yes or no answer.

Laravel is a server-side PHP framework. The backend (server-side) is where the site does its job, updates and changes. This relates to everything the site user can’t see in the browser such as databases and servers.  Laravel developers can build full-stack apps which means apps with features requiring a backend, such as exports, user accounts or order management.

However, as well as being a backend foundation for websites, the framework offers features to support your frontend activities too. Vue.js is officially supported by Laravel, and Angular and ReactJS are also often the recommended frontend frameworks to use alongside a Laravel backend.

Laravel’s features are what makes it so widely used by developers across the World. The features are rich and robust and makes a backend build less complicated to code however complex the requirements.

The fact that it is a modular packaging system means developers can easily add functionalities without writing them from the beginning. And if it suits the development project, there is the option to install ready-to-use packages.

There is a complete two factor authentication system which allows users to be authenticated with cookies and their credentials to be verified.

Also included with Laravel is an object-relational mapper. Called Eloquent, this presents tables as objects for easier, and therefore quicker, database queries and manipulation. 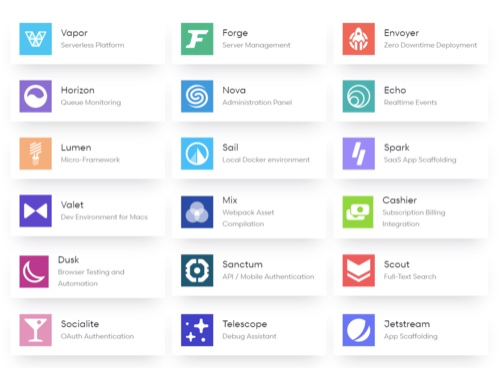 Why Laravel is the Best PHP Framework

There are numerous advantages of using a Laravel PHP Framework for developing backend projects and Laravel is certainly the best of the lot.

It’s very easy for PHP developers to get started on Laravel because PHP itself is such a familiar code and as such online businesses can save time and budget and benefit from better code by choosing Laravel for their server-side build.

The pre-built extensions, community libraries and tools in the Laravel framework can drastically cut development times of even complex web applications because developers can spend less time with basic coding and more time building the product required.

Developers can build more bespoke complex products, that are highly scalable, with the advanced features and architecture in Laravel that other software such as WordPress cannot offer.

Laravel is among the most secure web frameworks and uses SQL injection to shield the codebase and other data. It mitigates security risks to ensure smooth web applications’ experience.

Laravel uses a Model View Controller MVC architecture to separate domain, application and business logic from the rest of the user interface. This ensures code is organised and so easier to maintain and debug.

Continuously up to date Laravel documentation is easy for engineers of web development to access and online tutorials make it even quicker for them to have queries answered and deliver projects on time and with exceptional code.

Are there any Disadvantages to Laravel Development?

It can be argued that Laravel having less built in support is a disadvantage. This support is intentionally reduced compared to other frameworks such as Ruby on Rails due to the framework’s lightweight nature to ensure limited impact to an application. However, most developers don’t see this as an issue as support for Laravel can be easily resolved with third-party tools.

Laravel, as with PHP platforms in general, can create problems when updated but skilled developers who remain on top of version control ensure that such issues are quickly rectified.

Finally, there is a lot of documentation to refer to when a backend project is built in Laravel so developers do need to have some experience to get started with a project focused on a Laravel application. Thankfully, Laravel’s dedicated support and the huge online developer community negate this concern. There is plenty of help and advice out there.

Future of Laravel as a PHP Framework

So is Laravel PHP fit for future development? Can it adapt to the changing needs of businesses, developers and consumers alike? And will Laravel continue to be successful as a PHP framework?

Within the PHP ecosystem, Laravel is undoubtedly a dominant player compared with other PHP frameworks. It offers many hard to beat features which enable developers to build fast, functional, user-friendly web and robust applications for websites as well as being able to support mobile applications. As previously explained, it can speed up the development process to reduce overall timeline and budget and also integrates with the likes of mail services easily. Its documentation is robust and it also supports all the best standard PHP features.

Laravel, a framework with solid straight forward principles and advanced features, will continue to provide everything developers need to create good looking and functional websites way into the future. And the PHP environment is likely to continue to be a favourite amongst the skilled and experienced coding engineers at chilliapple.

If you have a Laravel project you would like to discuss or have a Laravel Developer skill gap that urgently needs filling, chilliapple is one of the UK’s PHP framework experts with years of experience in frontend and backend builds.

Which is the right ecommerce technology for you?

Developing, migrating or upgrading your ecommerce platform is no simple task. You know what you need from your online retail presence: ..

Get our latest Web and App tips and insights to help your business grow online! Join our growing community to receive valuable content for free!

*By subscribing you agree to receive emails from Chilliapple’s blog with the latest news and articles. You can unsubscribe at any time.

Looking for a price for your next app or web project?

Please select the checkbox to confirm that you are not a robot.